Caldana, hamlet in the municipality of Gavorrano, has been called "the pearl of Maremma": a pleasant city situated on the hills bordering the Tyrrhenian coast of Tuscany between Follonica, Punta Ala and Castiglione della Pescaia, in front of the sea of Elba and Arcipelago Toscano. the hinterland is characterized by the profile of the Colline Metallifere. Located at the center of the territory of ancient Etruria, a few kilometers away from places such as Vetulonia and Populonia where history has left important signs of ancient civilizations, has an urban layout with medieval buildings of great historical and architectural which define its shape to "Y". in some places the city wall is still existing and on it develops an impressive panoramic route to the valley.

The church of San Biagio, has a Renaissance façade inspired by Michelangelo and attributed to Antonio da Sangallo. The seventeenth-century canonical of St. Antonio of Padova and the Convento di Sant'Agostino, the Palazzo Arcivescovile and the Palazzo Tosi are the most important historical evidence of an urban center that has managed to pass down and impress upon his people a strong sense of "rootedness "up to the present. The sense of belonging developed from common historical, social and economic events has avoided the abandonment even in the most difficult periods such as the one resulting in the closure of the mines, a source of employment for many of its inhabitants, to the mid-seventies of the last century. The Community of Caldana shows the attachment to the roots by organizing historical commemorations, festivals, associational activities. The latest census data indicate a population growth in Caldana, impacting positively on the general data of the municipal area. 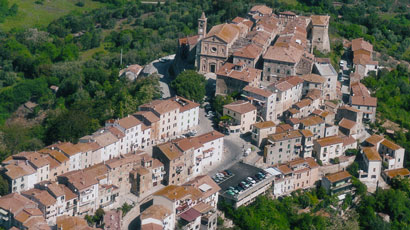 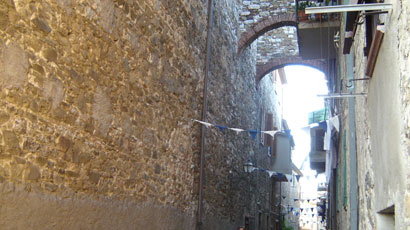